I first has the pleasure of of salivating over Evan Kalman’s creations at a floral design workshop that friends Michael & Darroch of Putnam & Putnam were teaching. Evan oh-so-beautifully prepared the most decadent French macarons for the class. I was instantly smitten with the craft, skill, and precision of Evan’s baking. His obvious passion and creativity certainly comes through in his confections, but what truly fascinates me is his desire to understand his ingredients — to break down each recipe into its core components and learn how they work with one another. He is a bit of a self-taught scientist in the baking arena and through fastidious research, he not only hones in on elements like the connection and balance of ingredients, but also ratios and technique. Since our initial meeting, Evan and I also collaborated on one of my all-time favorite posts on ES, these swoony and sexy black macarons! And, today’s recipe is like a winter wonderland of flavors, as citrus and cardamom mingle with a honey buttercream in the perfect cold-weather celebratory cake. 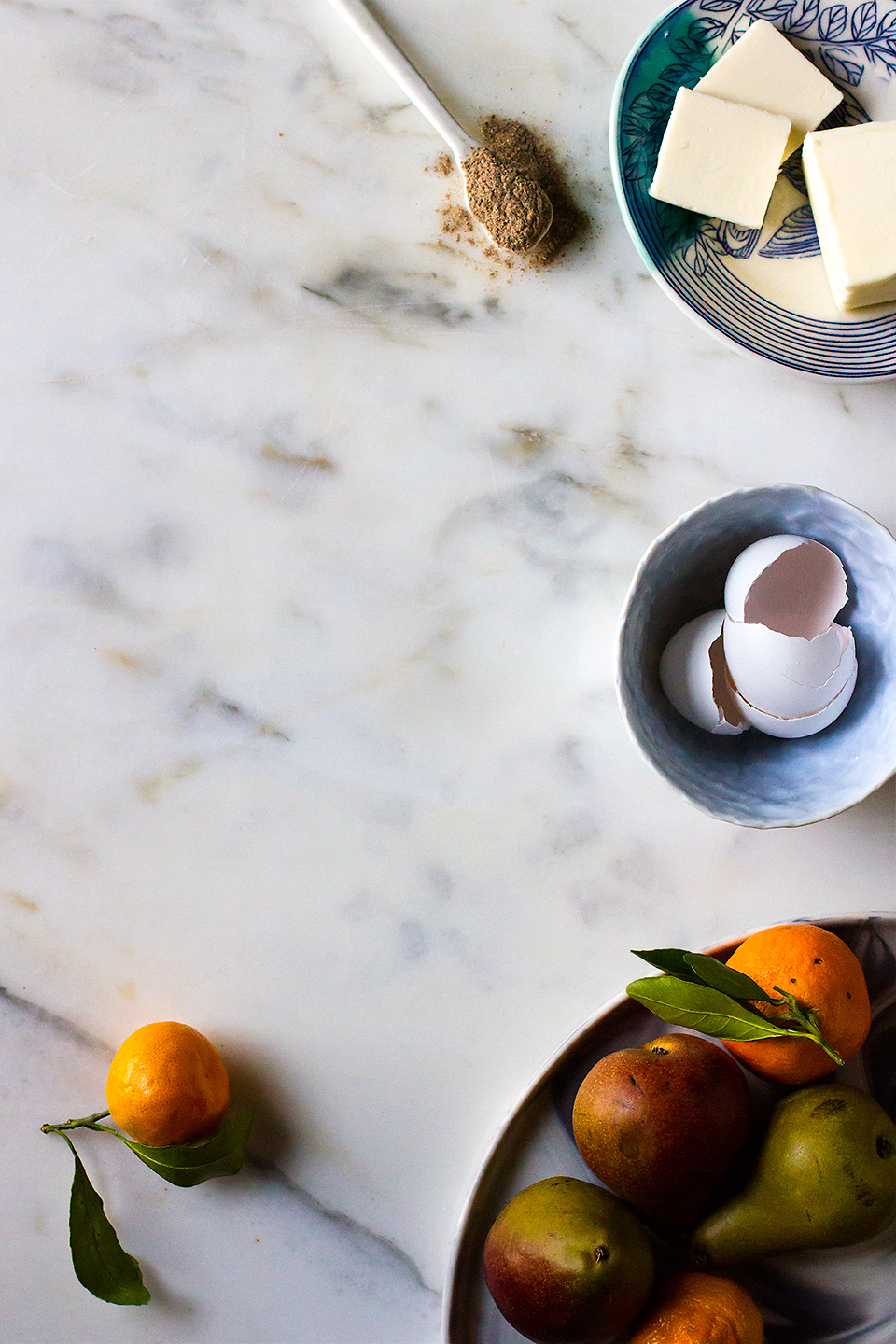 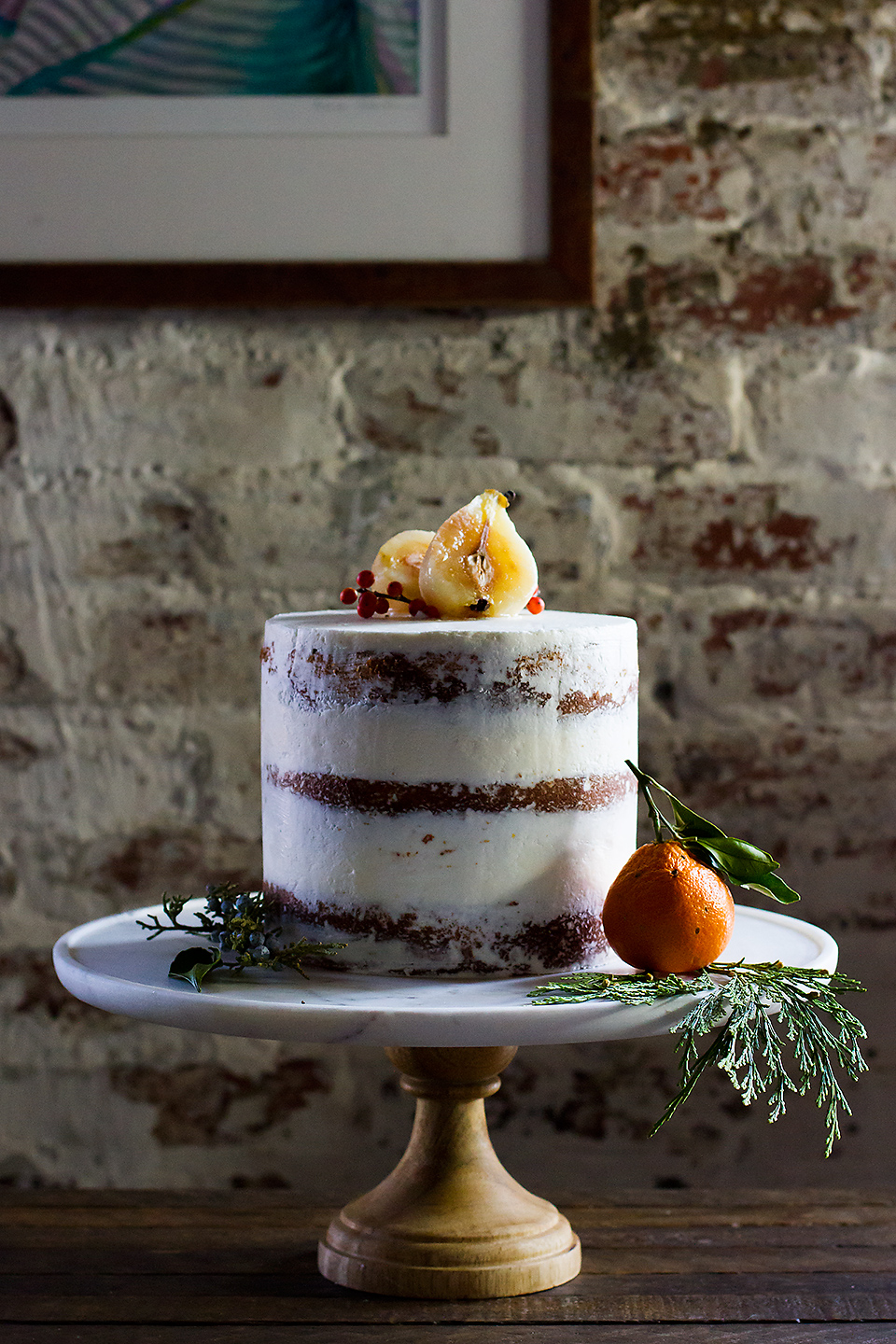 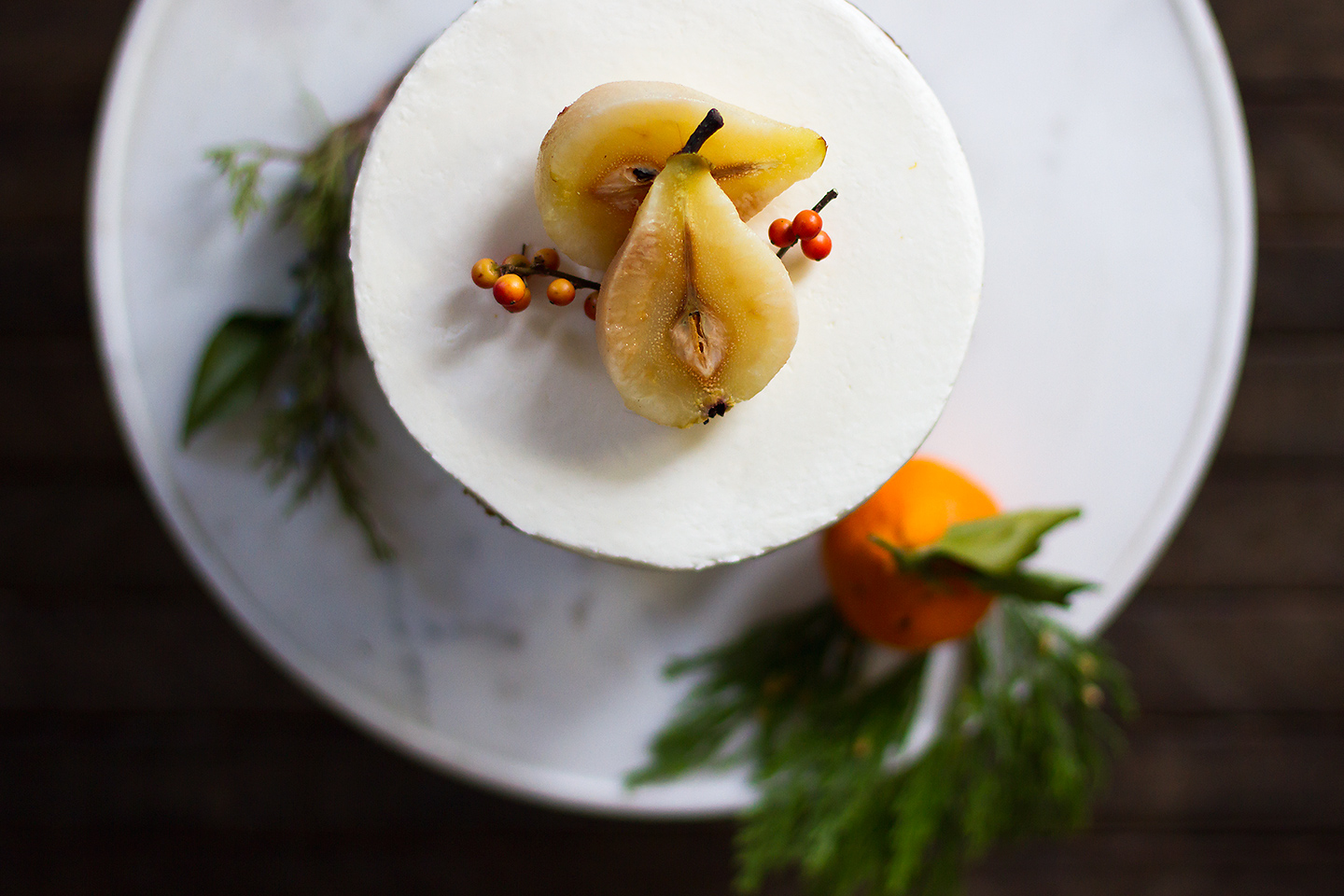 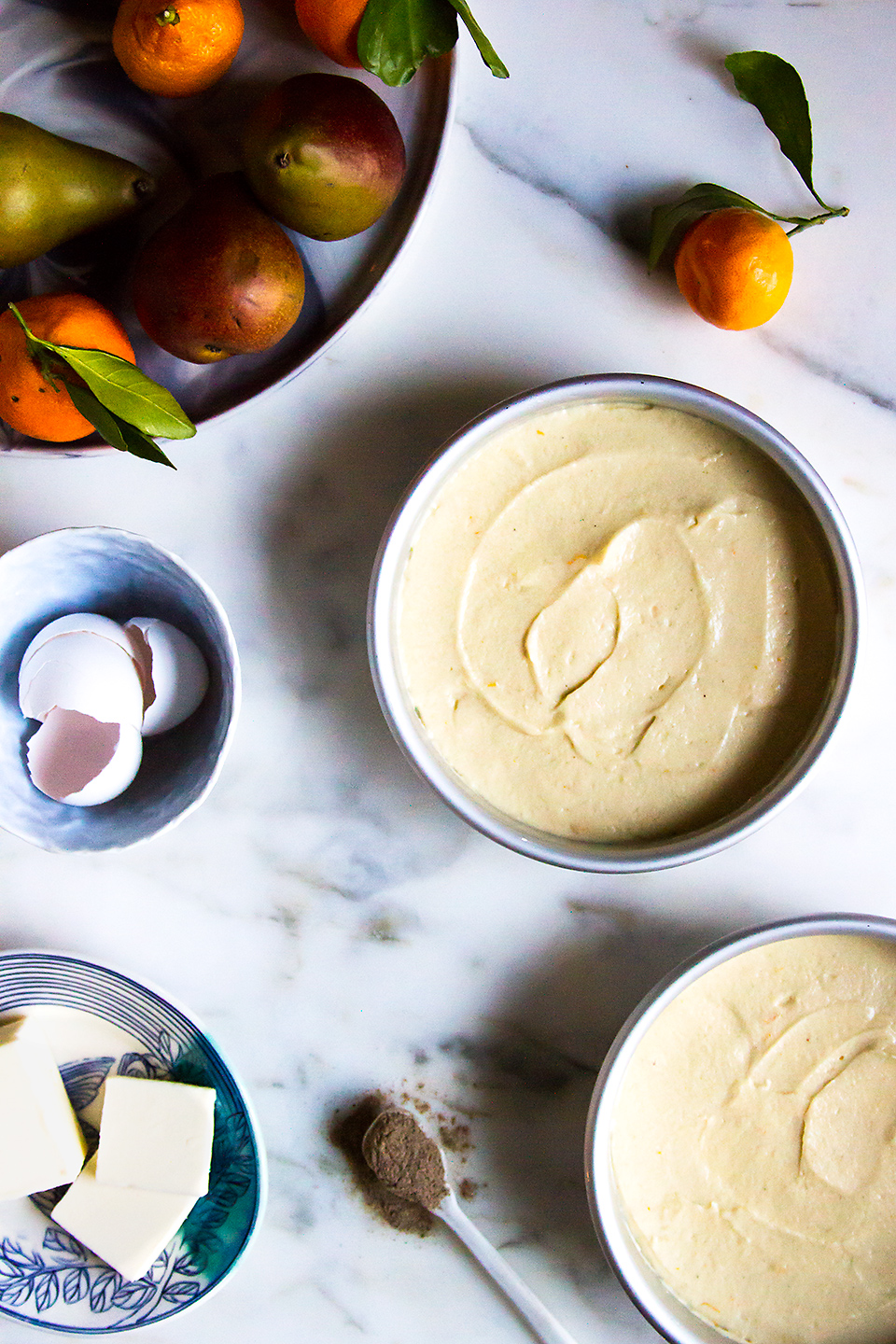 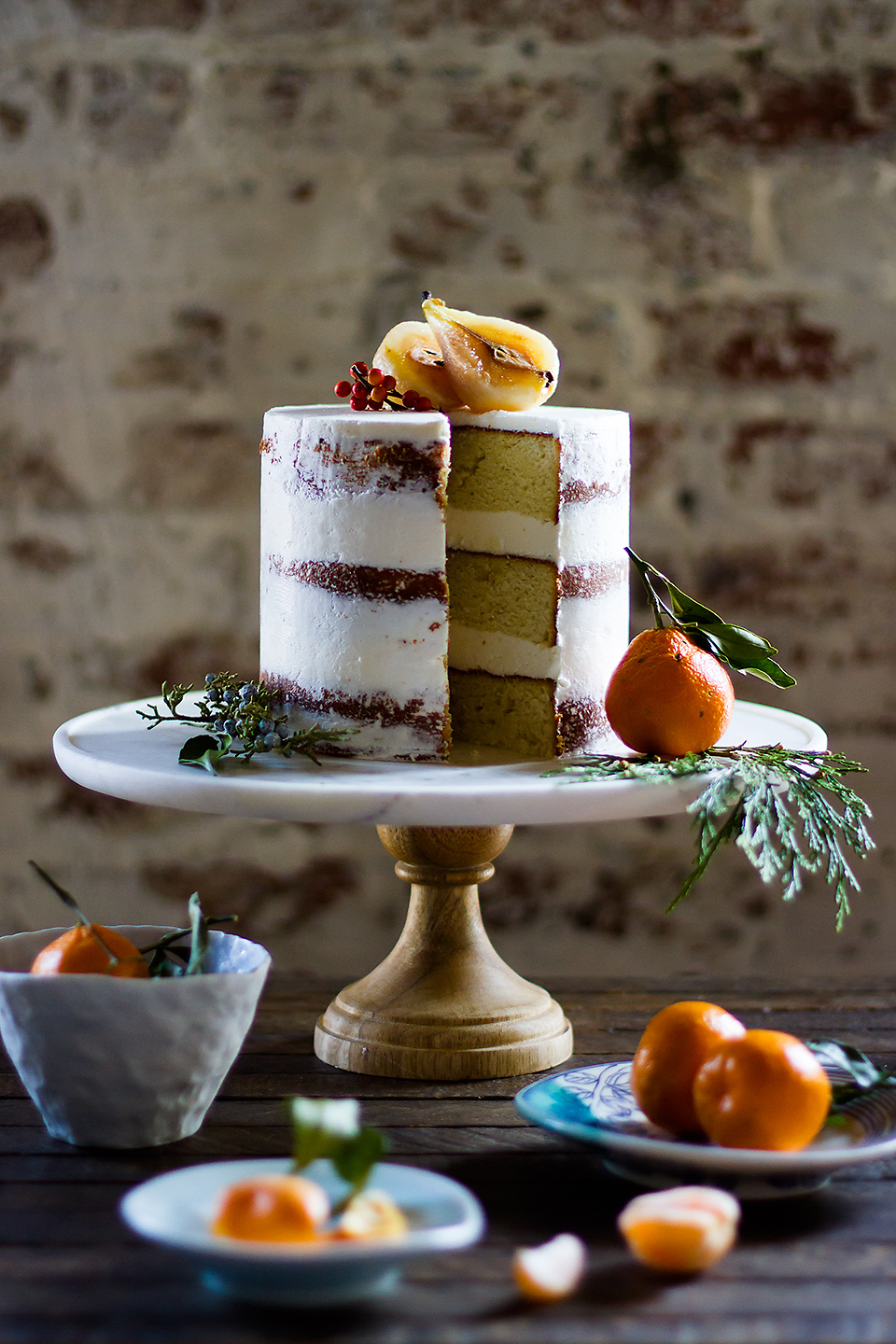 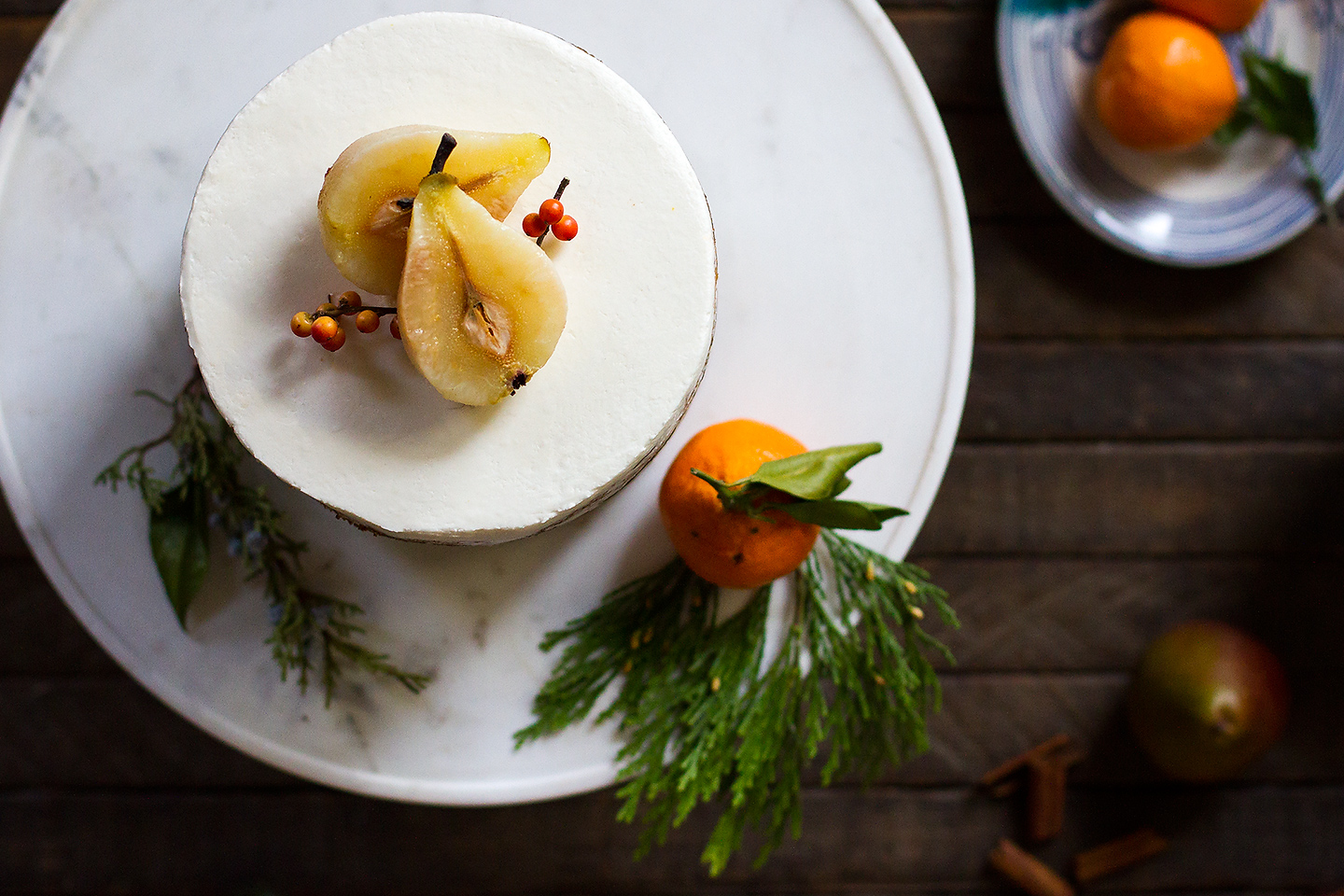 Sift the flour, cardamom, cinnamon, baking powder, and salt in a medium bowl and set aside. Mix the milk, orange zest, and vanilla together in a large measuring cup.

Divide batter between cake pans and smooth with a spatula. Bake until golden and a skewer inserted in the center of the cake comes out clean, about 45 minutes.

Cool the cakes for 15 minutes and then carefully turn out on a wire rack to cool completely.

While the syrup is cooking, whisk the egg whites at medium speed until soft peaks, about 2 minutes. Once the syrup reaches 238°F, quickly pour the syrup down the side of the bowl keeping the motor running. Whisk the meringue on medium-high until stiff peaks form and the bowl cools down, about 8 minutes.

Switch to the paddle attachment, and beat in each piece of butter one at a time until emulsified. Once all the butter is incorporated, beat on high until the meringue becomes smooth and fluffy, about 8 minutes. Mix in the vanilla extract and honey, about 1 minute more.

Frost the Cake: Fill a large piping bag fitted with a 1-inch tip with buttercream.

Place the first layer on a cake stand cut side up. Create a dam of buttercream about 1/4-inch from the edge of the cake. Fill the circle with about 1/2 cup of frosting, and top with the second layer cut side up. Gently press down to ensure the cake stays level. Repeat and top with the final layer bottom side up.

Crumb coat the cake to “glue” any crumbs down. Start by thinning about 1/2 cup of buttercream with a teaspoon or two of water. Spread a thin layer of icing onto the cake, and let it firm up in the refrigerator, about 30 minutes.

Using an offset spatula and slowly turning the cake stand, smooth the top working any extra buttercream onto the sides. To smooth the sides, hold the spatula in place positioned straight up and down against the cake at a 45-degree angle. Spin the cake stand to remove any excess buttercream and expose the sides of the cake. Continue to smooth as necessary.

Top with Poached Pears: In a large saucepan, heat the sugar and water over medium heat until the sugar is dissolved. Add in any optional ingredients, if desired.

Place the pears so they stand up in the saucepan and cook at a simmer until a knife slides easily into the pears, about 15 minutes.

Remove from heat and let cool in the poaching liquid. Place on top of the frosted cake.