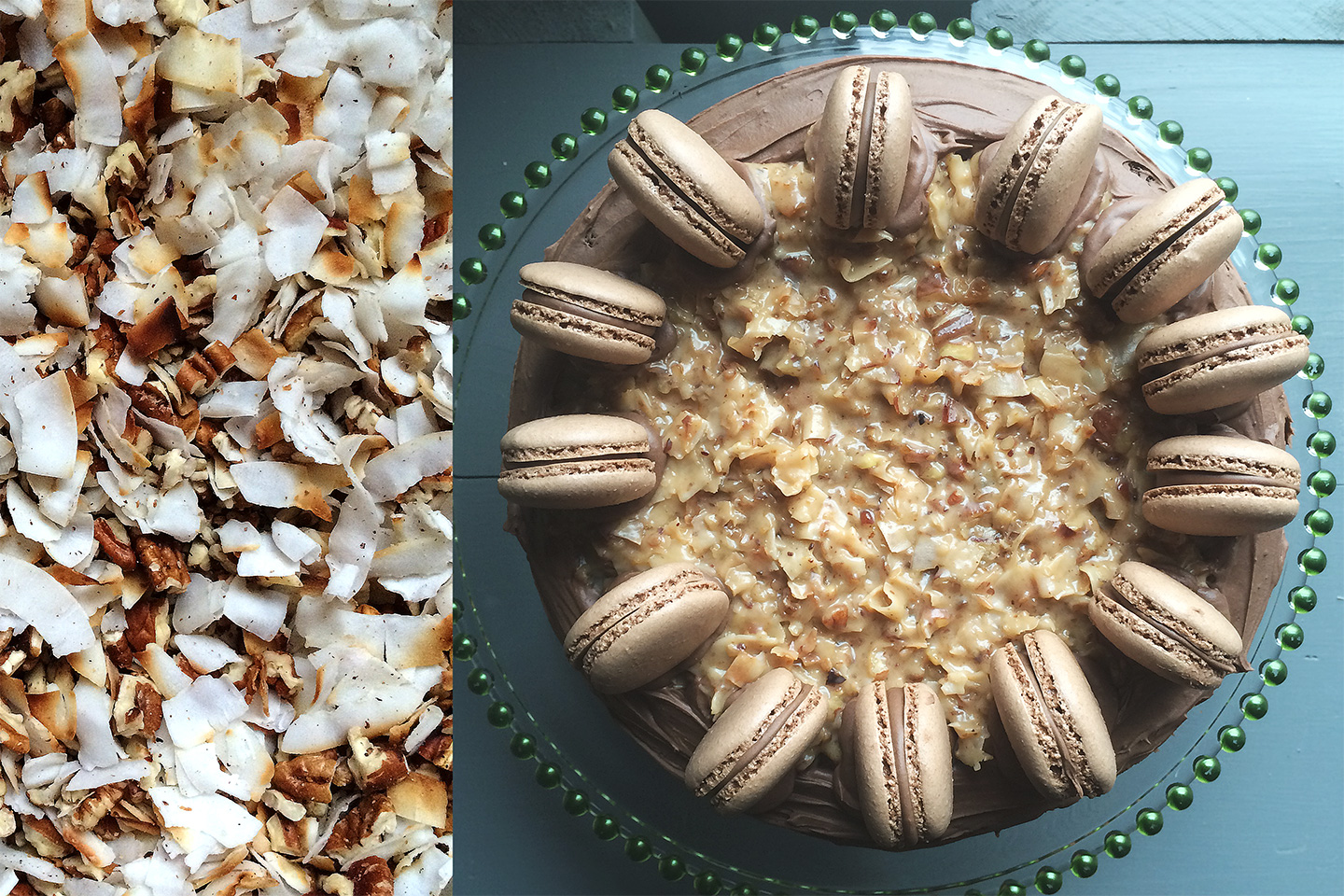 How can anyone not like German chocolate cake? Sign me up for a breakfast slice (or two).

This recipe comes barely adapted from David Lebovitz. What can I say, the man knows his German chocolate cakes.

Overall, I was pretty happy with how this turned out. The cake is rich, moist and has a deep chocolate flavor, and I could eat the filling by the spoonful (and did). I did end up biffing it though with the ganache and had to make another batch because it turned out grainy. I got impatient waiting for it to cool and kept tinkering with it in an attempt to get it to set up faster. So, while ganache version two-point-oh chilled, I had some time to read up on my Ganache 101, which I’ve detailed before. I should really follow my own advice…

Ganache can also be intimidating if you don’t know your ratios. A high ratio of cream makes a good glaze but a bad frosting. Not enough cream and your ganache will be too hard. So, because I love math, I thought I’d capture some standard ganache ratios and their applications.

Note: These ratios are based on weight where a 1:1 ratio means 4 ounces of chocolate to 4 ounces cream. 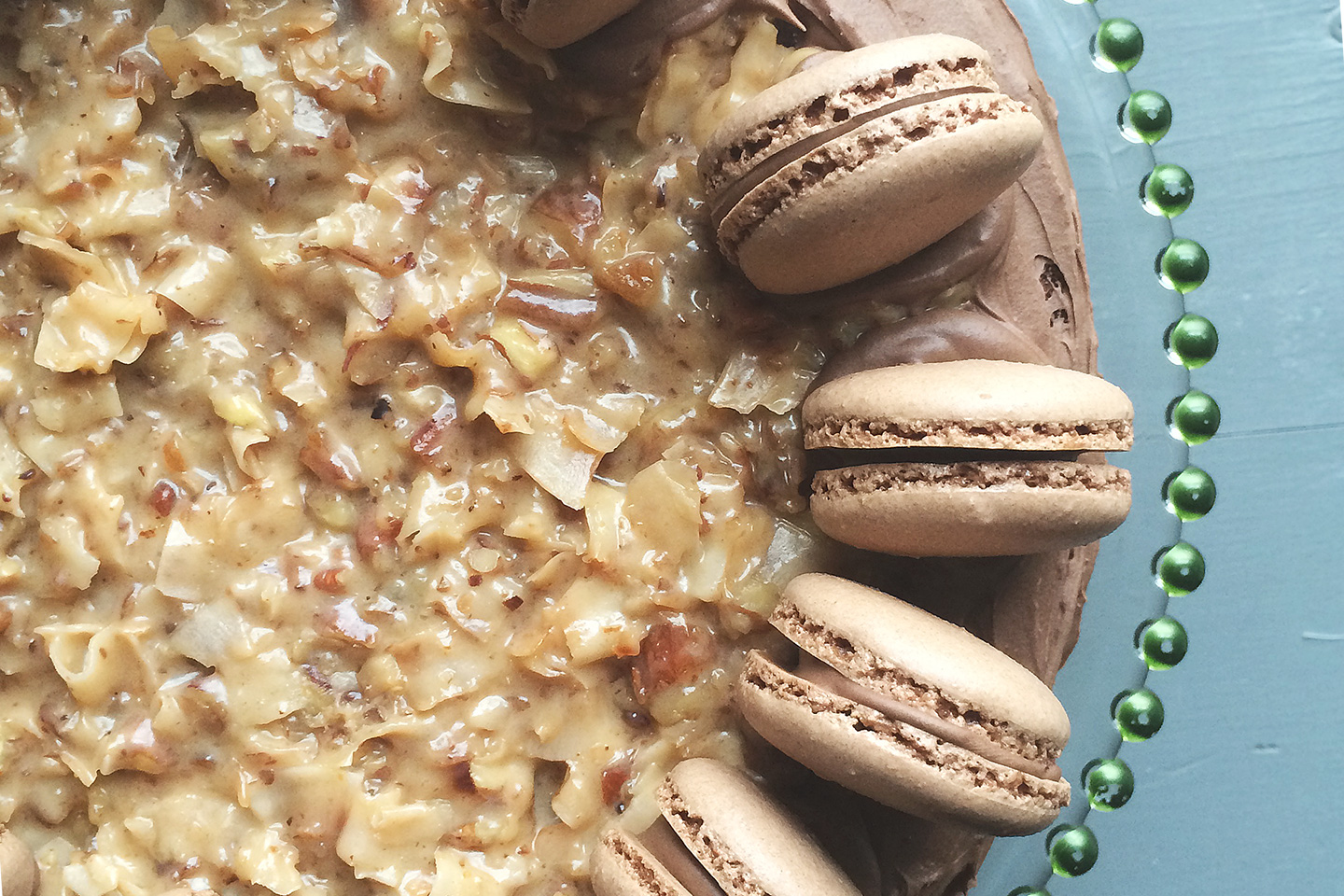 Know this: Don’t rush your ganache. Whatever ganache you use, let it chill. Let me say that again. Let. It. Chill. Glazes and frosting may take a few hours to set up, but truffles may take up to four hours.
German Chocolate Cake
Adapted from David Leibovitz
Yields one 9″ cake

Butter two 9-inch cake pans, then line the bottoms with rounds of parchment or wax paper.

Melt both chocolates together with the 6 tablespoons of water. Use either a double-boiler or a microwave. Stir until smooth, then set aside until room temperature.

In the bowl of an electric mixer, or by hand, beat the butter and 1 ¼ cup of the sugar until light and fluffy, about 5 minutes. Beat in the melted chocolate, then the egg yolks, one at a time.

Sift together the flour, baking powder, baking soda, and salt.

In a separate metal or glass bowl, beat the egg whites until they hold soft, droopy peaks. Beat in the ¼ cup of sugar until stiff.

Fold about one-third of the egg whites into the cake batter to lighten it, then fold in the remaining egg whites just until there’s no trace of egg white visible.

Divide the batter into the 2 prepared cake pans, smooth the tops, and bake for about 45 minutes, until a toothpick inserted into the center comes out clean. Cool cake layers completely.

While the cakes are baking and cooling, make the filling, syrup, and icing.

To Assemble the Cake:
Remove the cake layers from the pans and cut both cake layers in half horizontally, using a serrated bread knife.

Set the first cake layer on a cake plate. Brush well with syrup. Spread ¾ cup of the coconut filling over the cake layer, making sure to reach to the edges. Set another cake layer on top.

Repeat, using the syrup to brush each cake layer, then spreading ¾ cup of the coconut filling over each layer, including the top.

Mix the cream, sugar, and egg yolks in a medium saucepan. Put the 3 ounces butter, salt, toasted coconut, and pecan pieces in a large bowl.

Heat the cream mixture and cook, stirring constantly (scraping the bottom as you stir) until the mixture begins to thicken and coats the spoon (an instant-read thermometer will read 170°).

Pour the hot custard through a fine-mesh sieve into the pecan-coconut mixture and stir until the butter is melted. Cool completely to room temperature. Filling will be thick and sticky.

In a small saucepan, heat the sugar and water until the sugar has melted. Remove from heat and stir in the dark rum.

Place the 8 ounces of chopped chocolate in a bowl.

Bring cream, corn syrup, butter to just under a boil in a small saucepan. Remove from heat and pour over the chocolate. Let stand one minute, then stir until smooth. Let sit until room temperature, about an hour. Chill in the refrigerator, stirring every 5 minutes, until ganache just barely begins to hold its shape and and has a spreadable consistency. Chill for an hour or two longer for a pipe-able consistency.